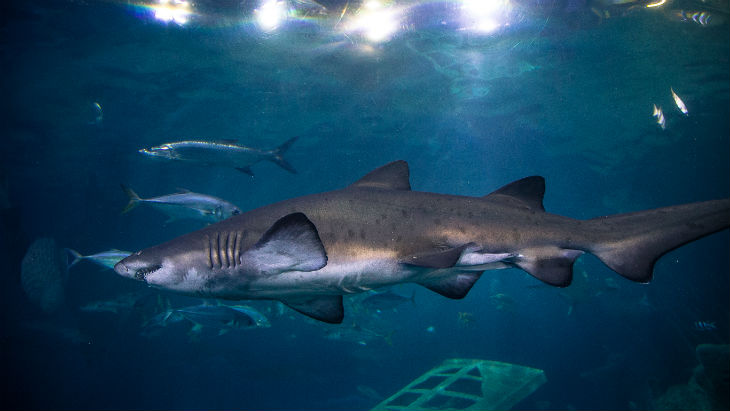 From Blue Sharks to Whale Sharks, Sand Tigers to Great Whites, there are many species of shark living in our Ocean today. In fact, at last count, there were a whopping 440 known species worldwide. They are thought to have inhabited the Ocean for over 400 million years – placing them back before even the first dinosaurs lived on Earth.

One of the oldest animals still in existence, there’s a lot we still don’t know about them. These complex and fascinating Ocean animals have often been misrepresented in popular culture, and contrary to common belief, many species are known to be shy and docile.

If you’d like to know a little bit more about these amazing creatures, then read on ti find out some fun facts bout sharks.

Sharks are a special type of fish that is known as an ‘elasmobranch’ – in other words, a fish that is made from cartilaginous tissue (the gristly stuff your ears are made of). Rays, Skates and Sawfish are also included in this category.

The skeletons of elasmobranchs are lighter than bone. Combine that with large livers that are filled with low density oils, and it’s little wonder they are as buoyant as they are.

Most sharks have brilliant night vision, allowing them to see their prey with ease when hunting at night. The backs of their eyeballs have a reflective layer of tissue called a tapetum, which helps them to see so well in low light.

Shark skin feels as rough as sandpaper because it is made up of small, teeth-like structures called placolid scales – also often called dermal denticles. These scales help the shark to swim with ease by reducing friction from the surrounding water.

4. A shark’s age can be determined by counting the rings on its vertebrae

If you look at a shark’s spine, you’ll see pairs of opaque and translucent bands running along it, and these can be counted, much like rings on a tree, to determine its age. Each band pair is thought to represent one year, so if a shark has five pairs, then it is estimated to be approximately five years old.
However, recent research has shown that this is not always an accurate method, and so scientists have to consider the species and size class, too.

5. A Whale Shark’s spot pattern is as unique as a fingerprint

Whale Sharks can grow to 12.2 metres long, weighing in at as much as 40 tonnes! Whale Sharks are easily recognisable by their beautiful spot-patterned backs, and no two look the same. Much like human fingerprints, they are completely unique to the individual, making it much easier for them to be identified during scientific studies.

Want to find out more about sharks, and see some first-hand? Click below to book your tickets for the National Marine Aquarium.