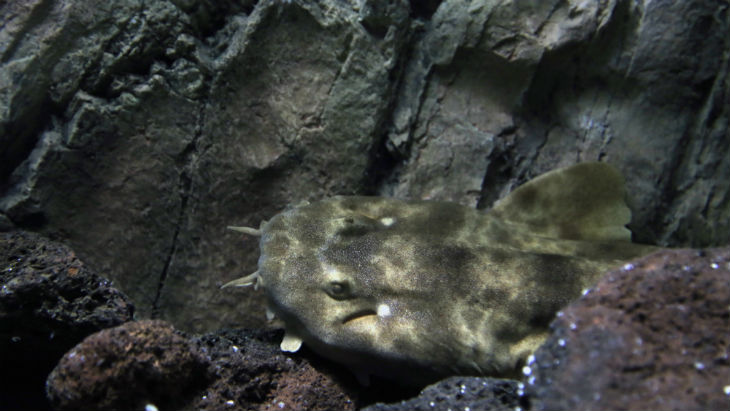 The name ‘Wobbegong’ is thought to have come from an Australian Aboriginal language – meaning ‘shaggy beard.’ This refers to the whisker-like growths around the mouth of these weird-looking sharks. They use these to detect their prey and to help blend in to the environment, as they look a bit like seaweed. Wobbegongs are ambush predators and lie in wait for their fishy prey to come to them, rather than the other way around. Keep an eye our for our Wobbegong, in the ‘Jawsome’ corridor of the aquarium, who loves to hide and can therefore be easy to miss!

It’s not a shark….and it’s not even a guitar! The Bowmouth Guitarfish is in fact, a type of ray. It has a round body like a shark, and a wide, flat mouth like a ray – so it’s a bit like a shark and ray fused together. This makes it one of the more confusing elasmobranchs.
Bowmouth guitarfish live in tropical coastal waters of the Indo-Pacific, at 90 metres depth, and feed on molluscs, crustaceans, and fish. 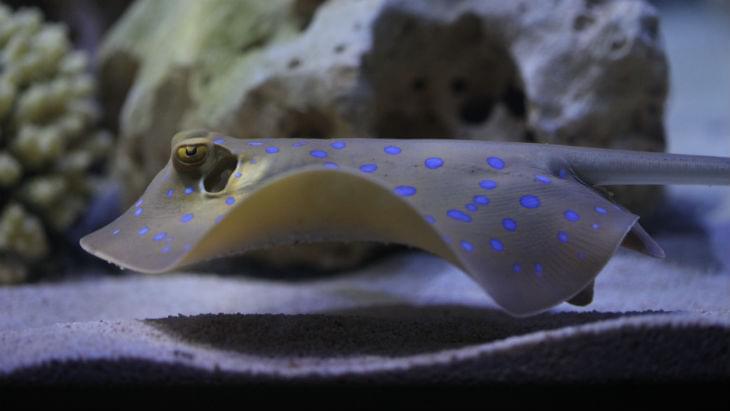 This species of tropical stingray is characterised by its bright blue spots, which make it look rather fabulous. These spots warn potential predators about their venomous tail spines. Despite being venomous, blue spotted rays aren’t particularly threatening to humans, and prefer to swim away and hide.

Least likely Ray you’d want to share a bath with:

Due to their poor vision, Electric Rays (or Torpediniformes) compensate with incredible sensitivity to electricity. Many other rays have electric organs in their tail, but these rays have two large electric organs on each side of their head where the current passes from the lower side to the upper portion of their body.
The Ancient Greeks may have used them to numb the pain of operations, but Electric Rays can still electrocute larger prey with a current of 50-200 volts, which similar effect to dropping a mains-powered hairdryer into a bathtub. 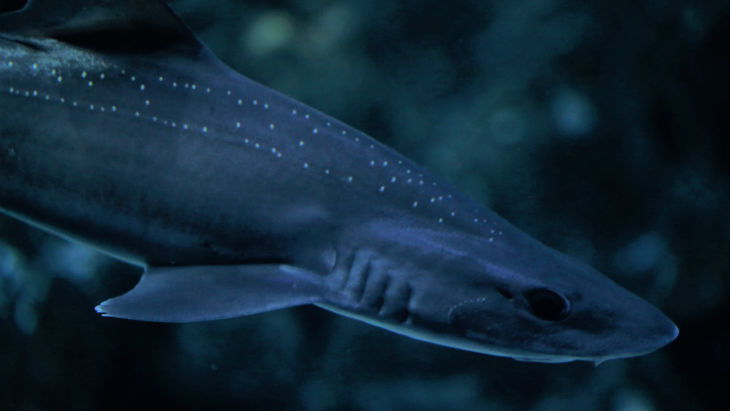 Like the Common Smooth-Hound, the Starry Smooth-Hound is a species of shark which lives in British waters. Reaching a length of around 140 cm, this grey shark has a scattering of small white spots on its upper surface – resembling a starry sky! We’ve named our Smooth-Hounds after constellations, be sure to look out for them in our Eddystone tank on your next visit!

We’re showcasing loads of amazing sharks and rays here at the National Marine Aquarium this Easter. Click here to read more about our Shark and Ray Easter games!