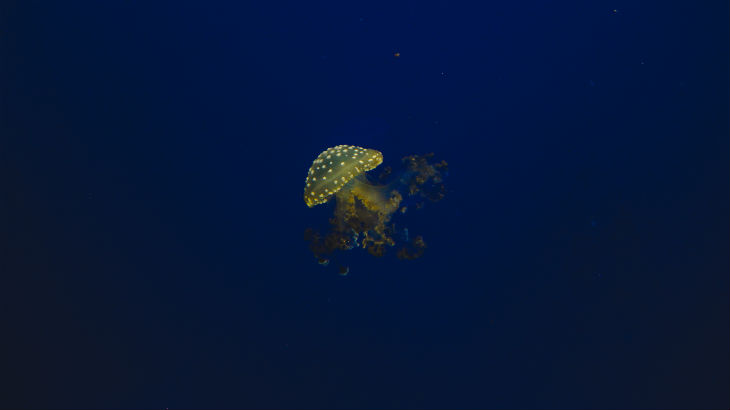 How much do you know about Jellyfish? Many of us have spotted them in the sea, or even washed up on the sand during a visit to the beach, and if you’re lucky then you will have also seen the variety we have on display here at the National Marine Aquarium.

These free-swimming Ocean animals are easily recognisable by their umbrella-shaped bells and trailing tentacles – although a few types are actually not mobile and are instead anchored to the seabed by stalks. Their tentacles are armed with stinging cells and may be used to capture prey and defend against predators – but although they have been known to give humans a nasty shock on occasion, this is usually due to coming into accidental contact rather than an intentional sting!

If you’d like to find out a bit more about these beautiful creatures, then read on – because we’ve put together five fantastic facts we bet you didn’t know about Jellyfish.

1. Some jellyfish can glow in the dark

Lots of jellyfish have bioluminescent organs – in other words, organs that emit light. This special superpower is handy both for attracting prey and distracting predators.

2. Jellyfish can clone themselves

Yep, that’s right – if a jellyfish is sliced in half, the two pieces can regenerate and create two new organisms. Pretty impressive stuff!

The life of a Jellyfish is split into two phases – the second being the ‘medusa’ phase, which refers to when they become Jellyfish as we know them. Prior to that is the polyp phase, and Turritopsis nutricula species has been nicknamed the ‘immortal jellyfish’ due to its ability to travel backwards to the polyp phase during times of stress.

Instead of brains, they have nerve nets, which sense changes in the animal’s environment and coordinate its responses.

5. Jellyfish predate dinosaurs by hundreds of millions of years.

Jellyfish don’t have bones, so fossils are hard to come by. Even so, scientists have uncovered evidence these creatures have been living in our Ocean for at least 500 million years! In fact, it’s likely that their lineage goes back even as far as 700 million years – possibly even longer. That makes them almost three times older than the first known dinosaurs.

Want to find out more about jellyfish? Why not visit us here at the National Marine Aquarium and see some first-hand?