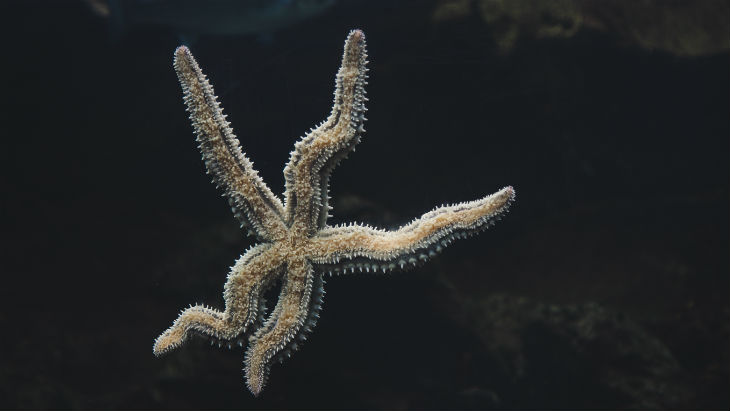 How much do you know about Starfish? These curious, five armed creatures are a popular attraction here at the National Marine Aquarium, where they can be found chilling out in a giant rockpool in our popular Plymouth Sound exhibit.

Starfish belong to a large group of marine mammals known as echinoderms. Also known as ‘Sea Stars’, they are usually seen in shallow water – so there’s a good chance you might come across one when doing some rockpooling of your own during a day at the beach.
Starfish might look like simple creatures, but these intriguing animals come with hidden depths. Here are 9 fascinating facts about Starfish that might just surprise you.

A Starfish is not a fish

In fact, despite their name, they are not related to fish at all. Perhaps surprisingly, Starfish actually belong to the group of marine invertebrates which also include sea cucumber, sea urchin and sand dollar!

They have no brain or blood

Starfish don’t actually have a brain, or even blood! In fact, they use filtered sea water to pump nutrients through their nervous system instead.

They weigh more than you think

They might look small, but in fact, Starfish can weigh up to an impressive 11lbs.

They live for a long time

The average lifespan of a Starfish is an impressive 35 years. Usually, large Starfish species tend to live longer than their smaller counterparts

There are around 2,000 species of sea star

They can live in a variety of different climates, both warm and cold, and can be found everywhere from the Indian and Pacific Ocean to right here in our local waters.

Not all Starfish have five arms

There is a group of less common species that have more than five – and some of them can grow as many as 40!

They cannot survive in fresh water

Starfish only live in salt water, which means you’ll only find them in the Ocean.

These crafty creatures don’t fuss if they are unfortunate to have one of their limbs come a cropper. They have the ability to grow a replacement limb all on their own – although doing so can take up to a year.

They turn themselves inside out to eat

Starfish like to eat clams, shells and mussels – and when they capture prey, they have tiny suction cups they use to grab hold of their food. When they eat, their stomachs exit their mouths to digest the food, and re-enters the body when they’ve finished eating!