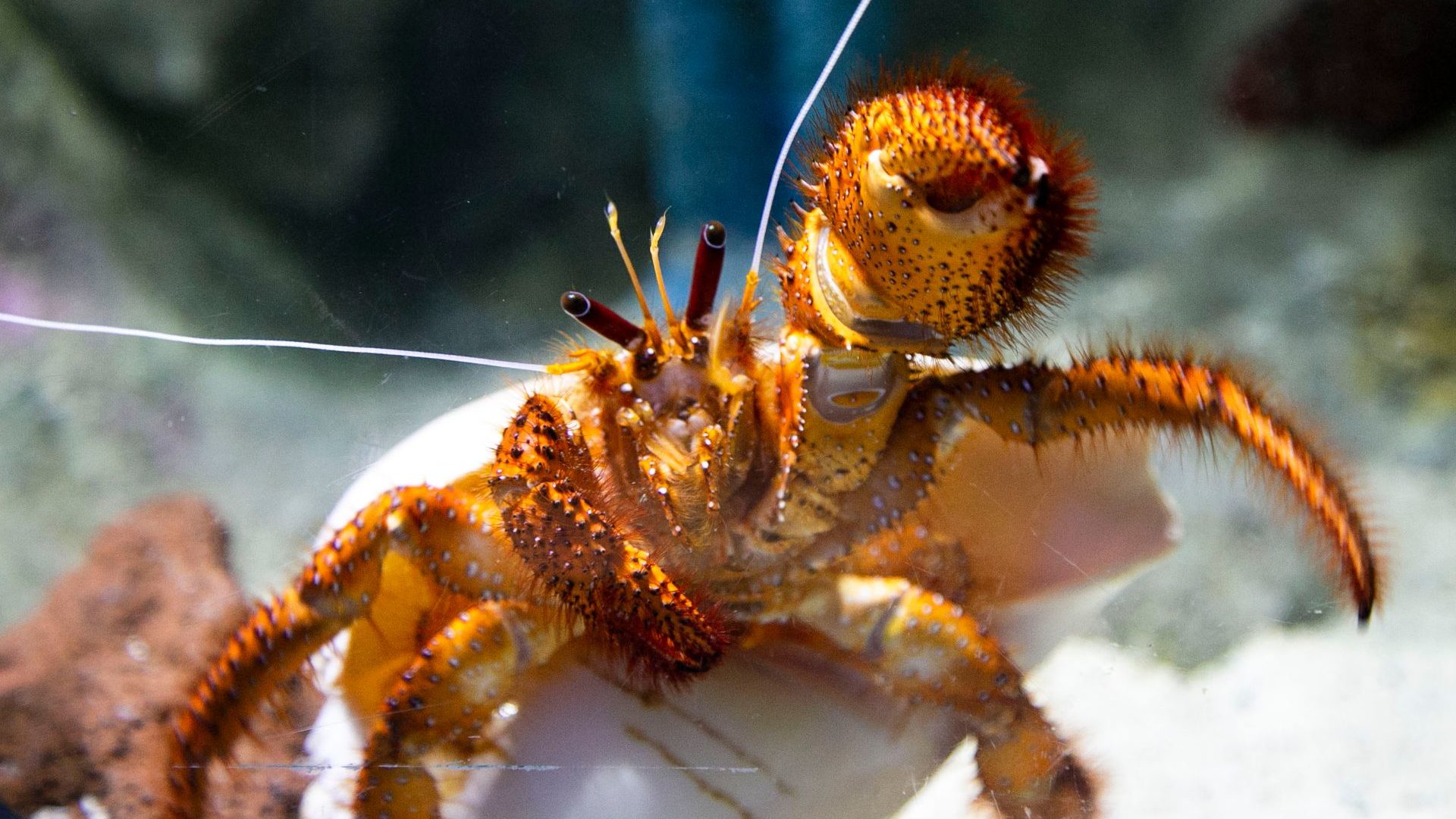 We’ve teamed up with Plymouth College of Art to create a new permanent home for Hulk the Hermit Crab!

Home | Blog | We’ve teamed up with Plymouth College of Art to create a new permanent home for Hulk the Hermit Crab!

The Aquarium is on the hunt for a new home for one of our best-loved residents, Hulk – a hefty Hermit Crab who has repeatedly either outgrown or broken his shell in recent years.

Despite many efforts to source a suitable shell, Hulk, who resides in our popular Moon Pool exhibit, has failed to take to any of them – and has recently been making do with a shell that doesn’t quite meet his requirements.

Now, we’re teaming up with Plymouth College of Art in a bid to find him his forever home, enlisting the help of imaginative BA (Hons) Product Design & Innovation and BA (Hons) 3D Design Crafts students to dream up a comfortable, functional and aesthetically pleasing shell that he’ll love. He’ll continue to live at the NMA inside his brand new, portable abode.

Ten students from the college have accepted the challenge to create a bespoke shell and have already visited Hulk at the NMA to get a feel for his needs, wants and the environment he lives in. They presented their preliminary design drawing to members of our Aquarium’s Husbandry team for scrutiny back in December, and are now busy refining their work and creating their real-life shells.

Using techniques including resin modelling, glassblowing processes and even 3D printing, the students are being given the opportunity to go all out to create something unique. Three finalists’ designs will be selected by our knowledgeable Husbandry team. These will then be brought to life in 3D, with the winning shell becoming Hulk’s brand-new home. 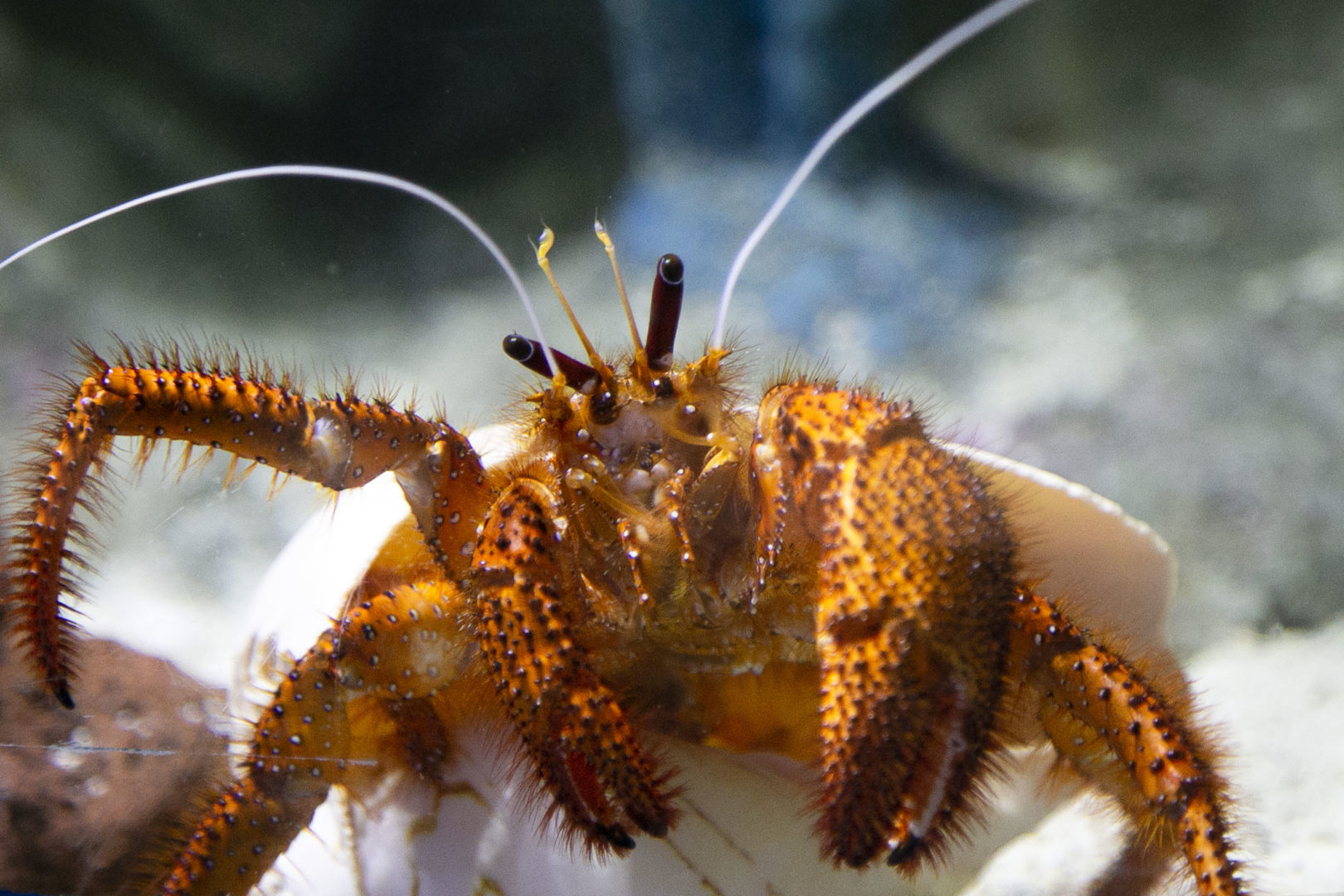 Charlie Preston, Senior Biologist at the NMA, said: “Hulk is a White-Spotted Hermit Crab and like all crustaceans, in the early stages of life, this type of crab moults frequently as it grows at a faster rate.  As they get older, the rate at which they moult reduces to around once every 10-12 months.”

“When they moult, they increase in size by quite a bit, so usually they will try and source a new shell when or shortly after it happens – however, this may depend on availability of new shells that meet their required criteria. Hulk outgrows his shells at a faster rate than we can source him new ones but is also quite a vandal and has been known to chip or break them – hence his name!”

The White-Spotted Hermit Crab is usually found in the Indo-Pacific, which reaches from East Africa to Hawaii, and lives on coral or rock reefs, usually shallower than 20 metres in depth.

Hulk, otherwise known as the Giant-Spotted Hermit Crab, Dardanus Megistos, has been happily residing at the NMA for 6 Years, having arrived from the Indo-Pacific area initially back in 2012 – and has been cared for daily by the Aquarium’s expert Husbandry team ever since.

Charlie, who oversees his daily care, explained: “I believe Hulk himself has moulted around 8-9 times since he has been with us. We have kept most of his moults, and the size difference between them is astonishing. His initial size was approximately 1-2 inches across, while the latest moult measures about 8-9 inches across!  This type of crab gets quite large and can grow up to approximately 25cm in width – however, 10-12cm is the more frequently encountered size.

“White-Spotted Hermit Crabs usually inhabit old gastropod shells, with their favourite being discarded shells of the Triton Trumpet. Unfortunately, we haven’t been able to source one of these for Hulk, and so we’re really excited to be working with the Plymouth College of Art to have them create him a bespoke and custom-made shell to call his own.”Gayle Matthias, Senior Lecturer with Programme Leader remit at Plymouth College of Art, said:

“This is a fantastic opportunity for students to design a home for a totally original client that can also be enjoyed by the public visiting the National Marine Aquarium.”

Calum Zachary, a BA (Hons) Product Design & Innovation student from Plymouth College of Art, said: “The design process has been unlike anything else I’ve worked on, from research about crab health and watching David Attenborough documentaries to learning how to sculpt porcelain clay. It’s exciting to be part of such a unique and quirky design process.”

Hulk is cared for daily by our dedicated Animal Husbandry Team, who ensure that the system in which he resides is running correctly and that water chemistry parameters such as temperature, salinity and pH are within an acceptable range.

Charlie added: “We must also make sure the lid on his tank is secure and weighted down, as he’s a bit of an escape artist and is very strong!

“The husbandry team will then clean his tank and remove any uneaten food from the previous day.  He normally has a very healthy appetite but sometimes prior to, or just after moulting he may go off his food for a week or so.  This allows him to prepare to moult and then recover from it respectively.

“Moulting is a very stressful process for any crustacean and requires a lot of energy.  Hulk is fed at approx. midday each day and is usually given some sort of enrichment device so that his food lasts a little longer. He is also kept stimulated and interested in food items, which helps to lessen the frequency of his vandalism as he has something else to concentrate on besides destroying the theming in his tank or trying to escape!”

Make sure to check out Hulk in his beautiful new home in our Moon Pool Exhibit next time you visit us at the National Marine Aquarium!