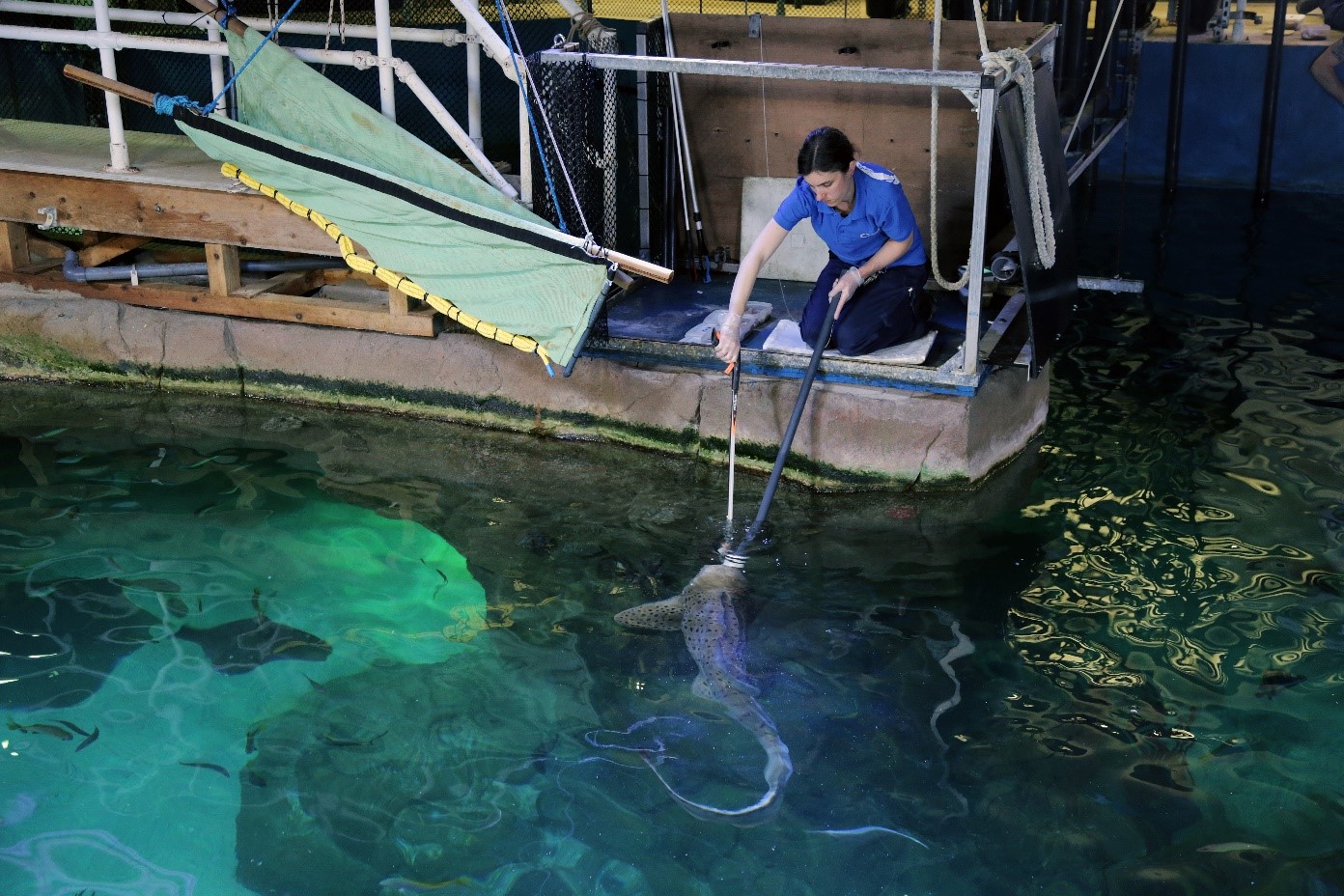 Meet our Biologist Diver, Heather Williams! With her lifelong passion for marine biology and an extensive background working in the industry, she’s now working on some exciting projects at the NMA, including new displays and dive shows. Find out what a day in her working life is like here! 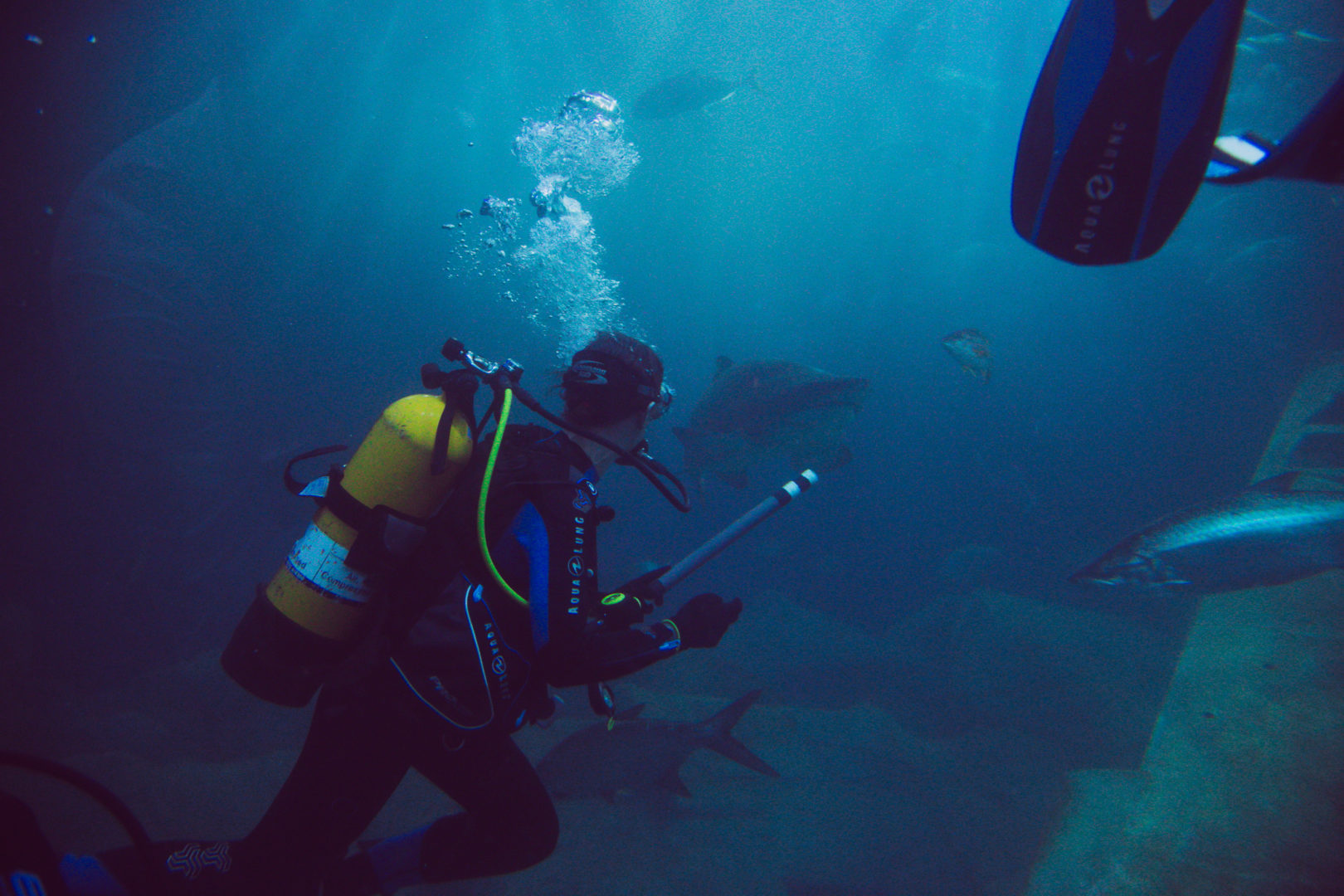 How long have you been working for the Ocean Conservation Trust at the NMA?

What did you do before you started working at the NMA?

I had always wanted to get involved in marine biology in some respect, so I learnt to dive at the age of 14, which was as early as I was allowed.  I moved to the other end of the country (from Teesside) to go to the University of Plymouth and volunteered with the husbandry team throughout my time as a student.  I took a break from the NMA for a few years but still stayed in the industry, working in other aquariums, before I decided to come back.

What’s a typical day like in your job role?

We start at 8am and walk around all the husbandry areas, checking on the animals and ensuring that the systems are running correctly.  Then we’ll spend time cleaning windows and maintaining exhibits before the public enter at around 10am.  A member of the team will spend the morning preparing food for the animals.  We will also spend time carrying out water changes in order to maintain good water quality for our animals.

In the afternoons, there is generally a dive in one of our larger exhibits to clean windows, feed animals and carry out general maintenance.  One day a week, a member of the team will collect a water sample from each tank or system (a connected group of tanks that share filtration) and will carry out various tests to ensure the water is of a high enough quality for our animals.

What’s the most exciting project you are working on currently?

We are currently working as a team to create a new jellyfish display.  We have also been squirrelling away behind the scenes to put together a new dive show involving full face masks that allow the public to ask questions to the divers – a first for the NMA!

What’s the most exciting NMA project you have been involve with in the past?

For around two years, I ran the jellyfish area and that coincided with some exciting activity where jellyfish are concerned.  There was a huge media interest at the time, as during one of those summers there were huge jellyfish blooms around the UK and, with the NMA being fairly in demand, it meant I got the chance to appear on both radio and television (including the One Show!).

Jellyfish husbandry has progressed rapidly in the UK, so it’s exciting to be involved.  A colleague and I from the husbandry team also spent a couple of days in Pembrokeshire to try and source some new genetic stock for our displays, alongside staff from The Deep in Hull and the Horniman Museum in London.

What qualifications or special skills and experience do you bring to the NMA?

One particular interest of mine is training.  I am an aquarium liaison for the BIAZA Animal Behaviour and Training Working Group which holds a two-day workshop about training and enrichment every two years to encourage all zoo and aquarium staff to think about their animals’ well-being as a whole rather than just nutritional concerns.  I have worked in the industry for many years, and have experience working in 4 separate aquariums in three different countries. I even spent a month volunteering at Monterey Bay Aquarium, which was a dream come true (the aquarium in the movie Finding Dory is based on Monterey Bay).

Do you have any projects or activities outside of work that are relevant to your role here?

Not at present, but in the past I have carried out surveys for ORCA (Organisation Cetacea) and have spent a lot of time in Tenerife doing photo ID research with pilot whales (Globicephela macrorhynchus) amongst other things.  I spent time volunteering at the Irish Seal Sanctuary too.

What are you looking forward to in 2020?

I have recently been tasked with organising the volunteer diving administration, so I will be doing a big recruitment drive for that which should be interesting!  Hopefully we will be doing exciting work on some of our exhibits too, so keep an eye out for that!

What do you love the most about working at the NMA?

No two days are the same, which is great!  I love when we have big projects and, although we often tend to work independently, we pull together and work well as a team.

My four-year-old son is very proud of what I do and calls it ‘my aquarium’, so that can’t be bad either!

What’s your favourite creature at the NMA and why?

I love Denzel the Boar Fish.  He is a proper character! I collected him from an eagle-eyed fisherman in the harbour here in Plymouth.  He knew he had something special in amongst his catch, and gave us a shout to ask if we were interested. I went over to the harbour to go and pick him up when I was pregnant with my son (he must have been the youngest aquarist in the world on that day!). Denzel is the only animal whose arrival date to the NMA I can remember!